The first Mass of St. Joseph Mission was celebrated at the home of Mr. & Mrs. Brazie in 1912. This residence was a farmhouse near the site of the first church. Fr. Jerome Wisniewski, OSB, a priest from St. Leo Abbey, started the mission celebrating Mass for a handful of Catholics in Zephyrhills.

In April of 1912, Mr. Henry Adams, a Catholic Union soldier, donated two lots for the construction of a church. The lots were located on 10th Street at the top of a hill north of the city limits.  A local man, Mr. Albert Naber, provided lumber for  parishioners who completed the church by 1914. Accommodating 75 people, the frame church had a small bell tower above the front entrance.  The first abbot of St. Leo, Charles Mohr, O.S.B., dedicated the church on April 27, 1919 and the new community celebrated Mass only once a month. Bishop Patrick Barry, DD, of St. Augustine (in those days Florida had only one diocese) administered Confirmation at St. Joseph for the first time on on January 21, 1923.

In March of 1942, Mr. & Mrs. B.A. Thomas donated two lots on 5th Avenue. A donation of four adjacent lots by the City of Zephyrhills followed on May 1, 1942. Mrs. Thomas gave four additional lots on January 9, 1945, and Miss Flora Yager donated one lot. These eleven lots comprised the property on which the church was built in 1942, construction that was overseen by Fr. John Schlicht, O.S.B. By this time, the congregation consisted of 27 families with 32 women and 48 men. Today, our property occupies two and a half blocks with eight buildings ministering to over 6,000 registered parishioners.
representing 2,148 families.

In February 22, 1959, tragedy struck as a fire destroyed our church building, sparing only the Sacristy. Parishioners converted this surviving space into a chapel that seated forty people and used it for daily Mass for three years while they celebrated Sunday Mass in a movie theater and, later, in the Zephyrhills Municipal Auditorium.

Benedictine priests commuted from St. Leo Abbey to minister at St. Joseph until, in October of 1960, Fr. Cassian Foley, OSB, became the first resident priest in Zephyrhills. The two-story frame house that Fr. Foley rented doubled as a rectory and a religious education facility as an architect, George Stickly of St. Augustine, designed a new church building that was built at an estimated cost of $90,000.

Following Fr. O'Reilly's death, Fr. John Colgan,  Fr. Bruno Szymusiack, Fr. Ralph Argentino, Fr. Jacob Monteleone guided St. Joseph's growth until, in 1998, Fr. George Rozycki was named pastor, and he served our community faithfully until his passing in 2011. Fr. George's tenure featured an expansion of our music ministry, a greater involvement of families in our parish life, an increased emphasis on good faith formation for our children, and the renovation of the Sanctuary in the Church, although Fr. George passed before this last project was completed.

Today, under Fr. Allan's leadership, St. Joseph continues writing the story of Catholics in East Pasco County. We welcome you to come experience how Jesus Christ lives among us. Please call our parish office at 813-782-2813 or explore this website for additional information about our faith community. 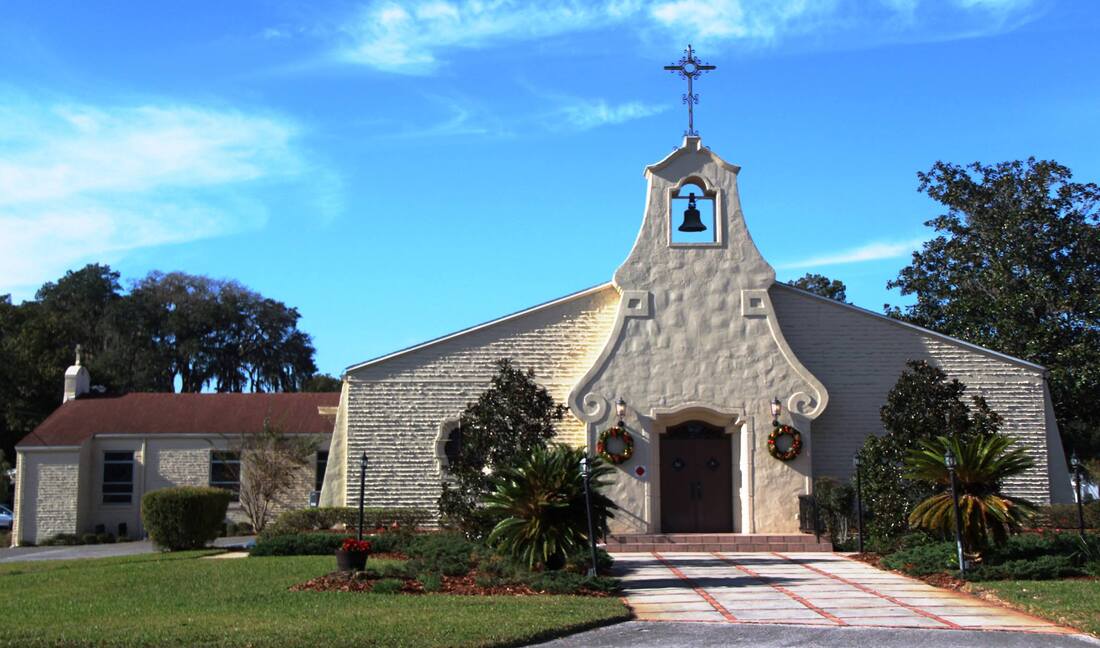